We’ve Been Up to Good 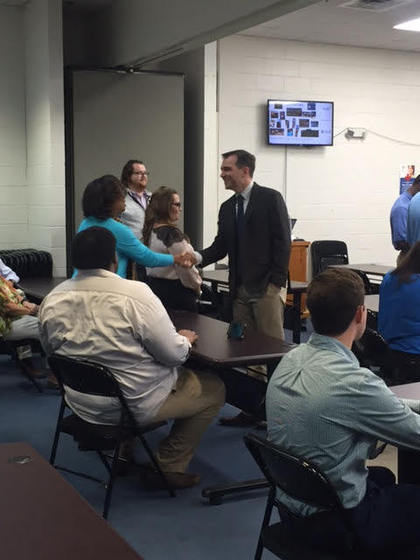 Thank you to all those who generously contributed to our reelection campaign. It was so great to see so many friends at the Event Center at Coco’s Italian Market during our reception. My family and I sincerely appreciate you and your continued support of our efforts to serve.

WE’VE BEEN UP TO GOOD
Fall is finally here! While our kids spend their time bouncing back and forth between ballparks and school and changing their minds daily about the perfect Halloween costumes, their dad is continuing his work on behalf of District 55. We have spent the past several months travelling around, listening to families, talking to small business owners, and gathering information from anyone willing to share. Through our research, we have updated our data for several issues, discovered a few new items requiring a thoughtful policy discussion, and verified the legitimacy of serious concerns with a few other issues.

Medicaid Expansion
Recently, I stood with fellow House Democrats to renew our call for Medicaid expansion in Tennessee. We requested Governor Haslam to call a special session for this purpose. While we noted that our state has already turned away over $3.5 billion of our own money from the federal government, I pointed out that “it is never too late to do the right thing. The people of Tennessee have suffered long enough.”

Neighborhood Association Meetings and Local Events
We have continued to attend as many of District 55’s neighborhood meetings and events as our schedule allows. As a former neighborhood association president, I have always valued these community meetings for the opportunity to have insightful conversation, provide updates, and stay apprised of ongoing issues and events in all of West Nashville’s many, wonderful neighborhoods. Please be sure and let us know when your neighborhood is meeting or if you’re hosting a neighborhood event.
Students’ Personal Information

In the wake of reports about the state demanding our children’s personal information from MNPS, I organized a conference call with Commissioner Candace McQueen and other Nashville lawmakers. During the call, she assured us that there had been no discussion of withholding money from MNPS for failing to disclose the data. Shortly thereafter, the Attorney General issued an opinion per the commissioner’s request. McQueen then used this opinion to maintain that MNPS is in violation of state law, and she now appears to be irresponsibly threatening vital resources due our children and teachers. In a September 13, 2017 letter to Dr. Joseph, she stated that, “If you do not…we will be forced to consider actions to enforce the law.” I disagree with the commissioner and AG’s opinion for multiple reasons, but primarily because the state law on which they rely to justify McQueen’s mandate was not intended by the legislature for their intended purpose. The House committee testimony makes this abundantly clear, and the Republican chairman who presided over the legislation’s passage out of his committee has publicly stated this was not his intent or understanding of the law when passed.

Private Prisons
In July, I organized a tour of CCA’s Trousdale Correctional Complex to look into the consistent stream of alarming information being communicated about that facility and what is going on behind the prison’s walls. Sen. Lee Harris and I were joined by TDOC Commission Tony Parker, other TDOC personnel, local officials, and multiple CCA officials on our tour. I also arranged for several family members of inmates to attend an informative session with officials on-site in an effort to have their ongoing concerns for their loved ones’ safety addressed and questions answered. While our tour guides and hosts answered many of my questions to the best of their ability and allowed us access to select parts of the Trousdale complex, there remain areas of serious concern with multiple CCA facilities and inherent problems with the private prison model.

Legislation
Earlier this year, we spearheaded and enjoyed several legislative accomplishments which included: increased state transportation funding with local options empowering local governments; inclusion of the I-440 resurfacing project in this year’s transportation budget; passage of the first piece of our mental health parity legislative package; inclusion of Charlotte Pike (White Bridge to River Road) on TDOT’s “new projects” list; additional protection for houses of worship from acts of desecration; and, preventing Governor Haslam from privatizing our state parks. Following up on this year’s and previous years’ legislative successes, it is important to continue our momentum in 2018.

THE ROAD AHEAD
While we have identified several issues on which we will focus in 2018, I remain open to your thoughts, areas of concern and suggestions for new legislation. We are continuing work on the following issues: pay equality; mental health parity and addiction equity; tax-free student textbooks; transparency for public contracts; small business tax cut for craft brewers; professional privilege tax cut in year one; unlimited absentee voting; and, enhanced criminal penalties for use of semi-automatic firearms in felony.

New issues being considered, researched and on which we are currently working include: lunch shaming; health insurance regulation; alternative transportation funding models; juvenile justice reform; private prison regulation; mental health and addiction services in corrections system; denouncing white nationalists and neo-nazi groups as domestic terrorist organizations; corporate/citizen environmental responsibility; and, worker protections for environmental cleanup sites. If you know of an issue requiring some policy discussion or would like us to consider possible legislation, please get in touch with us.